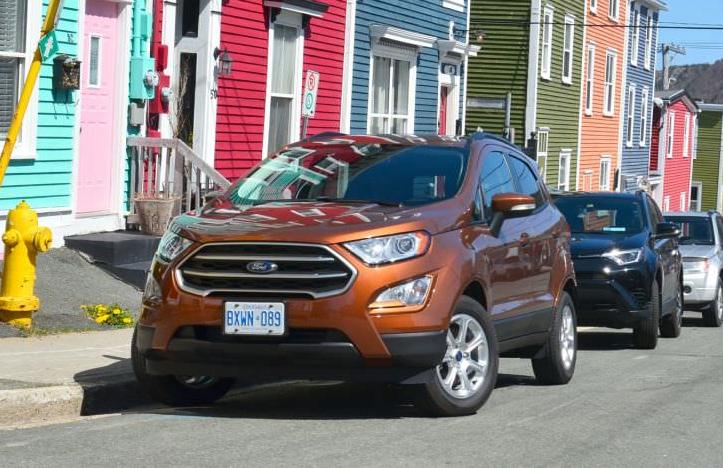 One of the fastest-growing segments in the auto industry is that of sub-compact utility vehicles, or crossovers as they are called.

Ford may be late to the party, but it has brought a serious contender. The 2018 EcoSport is already at Ford stores and the early take rate indicates it is a success.

The EcoSport is not a new vehicle; it was originally developed for markets in South America and India and produced in Brazil 15 years ago.

A second generation, launched in 2012, was developed for a more global market. It is produced in China, Brazil, Romania, Russia, Thailand and India.

The version we get rolls off one of two assembly lines in India and makes its way to Canada via Autoport in Dartmouth.

This is a very small vehicle - based on the same platform used for the Fiesta, it is the smallest of Ford?s utility vehicle fleet, by a considerable margin. The Eco-Sport is 43 cm shorter overall and the wheelbase 17 cm less than the next smallest Ford ute - the Escape. It is among the smallest in the segment, a half-foot shorter than the others - and taller.

That short and tall shape looks better in person and on crowded city streets than in photos. The diminutive size makes it ideal for crowded urban environments whether coping with heavy traffic or into tight confines and parking spaces.

The large cargo door is hinged to open sideways with the opening on the curbside. The handle is cleverly hidden within the passenger side taillight assembly.

The standard engine is a turbocharged 1.0-litre three-cylinder producing 123 horsepower. It comes on all front-drive models. AWD is paired with a normally aspirated 2.0-litre four-cylinder engine that puts out 167 horsepower. All EcoSports are equipped with a six-speed automatic transmission.

Although there is not much distance between the bumpers, the EcoSport is not short of features. Standard equipment on the most basic model includes 16-inch alloy wheels, SYNC with 11-cm screen, six speakers, rear-view camera, a pair of fast-charge USB ports, cruise control and automatic headlamps.

The SES trim gets a blind spot information system, 110-volt outlet, navigation, a 20-cm screen, 17-in alloys and the ability to connect up to 10 devices through a 4G LTE Wi-Fi hotspot.

The Titanium version has all that, plus leather seats, heated mirrors, heated steering wheel, and a 10-speaker, 675-watt B & O audio system.

There are bins, cubbyholes and storage spots scattered throughout, even provision for tablets on the back of the front seats. There is 592 litres of space behind the rear seat, 1,416 with it folded down. A slick three-position cargo shelf allows you to maximize cargo space or privacy.

The view from the tall perch is good in all directions with the exceptions of a serious blind spot at the very wide base of the A-pillar.

On the road, the EcoSport impressed for its quiet cabin and refined ride - much more supple than you would expect from such a small and tall vehicle riding on such a short wheelbase.

1. Five-passenger capacity - The EcoSport may have belts for five, but only the two in front will be comfortable. Rear seat space, especially knee and legroom, is minimal with the front seats set to accommodate a decent-size adult. Child seats might be an issue.

2. Fuel economy - The 1.0-litre, three-cylinder engine is an award-winner. But it struggles to cope with 3,500 lbs. plus occupants on anything less than level ground. It will propel the vehicle and a couple of folks inside with relative ease - but you can have Eco or Boost - not both.

Over several 50-70-km-long legs of the drive here in very hilly eastern Newfoundland, my driver and I witnessed average fuel economy numbers in the 13-14 litres/100 km range in a front-drive EcoSport with the 1.0-litre engine.

Those numbers are a far cry from the laboratory-produced ratings, and they improved dramatically to nine on the return trip in an EcoSport equipped with the normally aspirated 2.0-litre engine and all-wheel-drive.

The little motorcycle-size engine is at ease - and extremely thrifty - on relatively flat surfaces. But should you encounter a hill or need to accelerate to join traffic, for example, the turbo forces more air into the engine, which in turn requires more fuel.

Having said that, we drove around the city, up Signal Hill and out into the surrounding countryside commenting on how the vehicle did not feel underpowered. It performed well. It was only when we started to log fuel mileage that we saw the cost of that seemingly effortless performance.

With the larger engine, the times dropped by more than a second and fuel consumption dropped dramatically. Ford expects the EcoSport to attract urban dwellers and in these situations, in relatively flat spaces, the 1.0-litre will be suitable.

I expect the majority of Eco-Sport buyers will opt for the all-season security of all-wheel drive and will thus have the 2.0-litre engine and fewer trips to the gas station.

Ford says the EcoSport will tow up to 2,000 lbs. when properly equipped. That would be an interesting proposition.

With the four-cylinder engine the EcoSport is a contender, especially for city dwellers. It has a stylish interior, pleasant ride and the features consumers have come to expect.